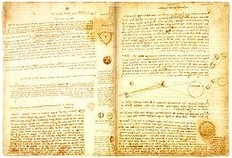 In 1994, Bill Gates bought Leonardo da Vinci's notebook, the Codex Leicester at an auction for US$30.8 million, making it the most expensive book ever sold. The notebook has extensive scientific writings on geology, astronomy and hydrology.

Bill Gates exhibited the Codex Leicester at the Museum of Natural History in New York. A team of scientists gave lectures on various aspects of Leonardo's notes. Geologist Ann Pizzorusso spoke about the difference between the two versions of the Virgin of the Rocks using supporting evidence from the Codex Leicester.