The Louvre painting on the other hand, shows a congruence in the rocks.  Both the sandstone and diabase are weathered and the fracture surfaces are weathered in accordance with the respective hardness of each of the rocks.  The result is an accurate portrayal of the sandstones, which have been rounded by water and wind erosion in contrast to the diabase, which is much more resistant, and therefore retains its structrural characteristics.  Leonardo is able to capture this contrast first, by having an understanding of how the rocks actually look and then representing this appearance realistically through his use of light and color.  Leonardo’s use of sfumato and shading suggest the appearance of a moist, musty grotto.﻿ 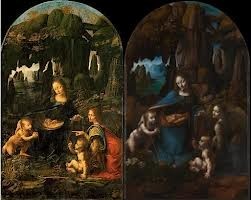